Presenting evidence is the key factor in deciding the outcome of a court case. In a criminal matter the case at hand will be decided by proving facts ‘beyond reasonable doubt’, in a civil matter the result will be determined by demonstrating factual matters ‘on balance of probability’. Evidence and facts will sway a magistrate, judge or jury about the matter at hand, and photographic evidence is one of the most powerful ways to prove facts that we have today especially when it comes to accidents or injuries.

Brief History of Photography and the Law. 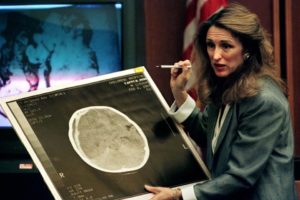 Photography, or ocular proof, is a relatively new form of evidence and has altered the way that testimony, in particular hearsay evidence is admitted in a legal proceeding.

Elsewhere photography made appearances in courtrooms worldwide, in the 1859 case of Luco v. United States, photographs of signatures were ruled admissible in court for the first time in the world to prove forgery of land claim documents.

Photographic technology accelerated rapidly and by 1929 sound and motion recording of a confession was ruled admissible in Commonwealth v. Roller. Five years later ultra-violet photographs of a footprint were deemed to be admissible evidence in State v. Thorp. In 1943 colour photographs were first made allowable as evidence in Green v. City of Denver and Infra-red images were also used as evidence in Kauffman v. Mayberg.

In 1990 the first digital camera was released and began a new wave of photography and by extension new laws that prescribed how digital images were to be used in legal proceedings.

Australian States have uniform laws around the admissibility of evidence, and all follow the same basic rules of admission with any form of evidence as written in the [Commonwealth] Evidence Act (1995). One of the key definitions around the admissibility and weight of evidence is how documents, including digital photographs are treated in a court. A document can be loosely described as any record of information. The act describes a document as:

“Anything on which there is writing;

Anything on which there are marks, figures, symbols or perforations having a meaning for persons qualified to interpret them;

Anything from which sounds, images or writings can be reproduced with or without the aid of anything else;

Interestingly this also includes any metadata encoded within a document or photograph. Exif (Exchangeable image file format) metadata will record information such as when the picture was shot and any geo-location data pinpointing where the picture was taken. The use of this metadata as evidence is instrumental in catching criminals and in successfully prosecuting them.